Urgent concerns of the newly formed Board of Trade in 1906 were sanitary conditions of the village, lobbying mills, manufacturers and store owners to locate in the village. Road conditions, railway crossings and the exact location of a proposed provincial asylum were topics of intense discussion. Brochures and pamphlets were printed for mailing to Eastern Canada, U.S.A., and England, with delegation travelling to England encouraging settlers and businesses to locate in the North Battleford area.

Battleford also formed its own Board of Trade which enjoyed limited success over a period of years, eventually replaced by a merchants association and becoming part of Battlefords Chamber of Commerce in 1977, with the Chamber representing the Town and City business community.

Boards of Trade and Chambers of Commerce have historically been free enterprise in nature, guided by volunteer leadership, funded by voluntary membership subscription and motivated by areas of interest and concern as expressed by the member business community.

Since the first Board of Trade, independent of government affiliation, was formed in Halifax in 1750 and the first Chamber of Commerce in Kingston, Ontario in 1841, the broad definition of a Chamber of Commerce's function in a community has not changed significantly. The original intent of people working together to make their community a better place to live is our guideline today as it was many years ago.

A more specific definition would describe the Chamber as a voluntary organization established to promote civic, commercial, industrial, and agricultural progress of our community and district and to work for sound legislation and efficient administration at the municipal, provincial and federal levels of government. 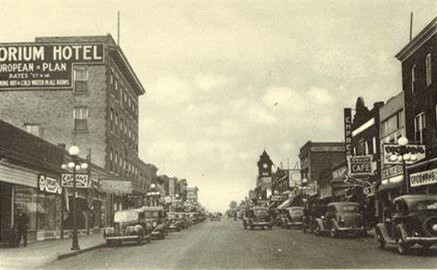 An evaluation of the role of the Board of Trade in the rapid growth of North Battleford in the early 1900s clearly demonstrates the influence of this group of business leaders in attracting settlers, generating new business ventures, designating railway lines, routing roads, and restoring semblance of order to unplanned community site development.

Quality of life was a foundational priority with constant efforts being made to provide and improve community services such as hospitals, fire protection, schools, and transportation services. The restructuring of Battlefords Chamber of Commerce in 1977 held the purpose to serve business needs of both Battleford and North Battleford, demonstrating a positive sign of the communities' awareness that: together we have so much more to offer in promoting development and quality of life in the Battlefords!